This was the fourth time Scott grew a giant pumpkin.  He actually grew 12 again this season! Yes…12!

Did you know that Scott grew 1 pumpkin over 1,300 pounds and 2 pumpkins over 1,400?! He could only enter 1 pumpkin per sanctioned weigh off event, so he entered 3 different Giant Pumpkins into 3 different Contests (Sep 26, Oct 3, Oct 10) — it was Scott’s award winning Giant Pumpkin #3 at Contest #3 that qualified Scott for the 4,000 Pound Club (aggregate weight for his Top 3 Giants) and coveted Certified World Recognized Great Pumpkin Commonwealth (GPC) Jacket — Scott is the 1st grower in Western Canada to achieve this milestone — it’s kind of a BIG deal!!! And…Scott’s green monster squash weighed in at 725.5 pounds and set the new BC Squash Record!!!

Photo of Scott Carley with his 1st place award winning pumpkin on Sep 26, 2015.

Seattle Times News Article “A Little Pumpkin at the Competition” on Sep 26, 2015:
http://www.seattletimes.com/seattle-news/a-little-pumpkin-at-the-competition

On Oct 3, 2015, Scott Carley’s giant pumpkin (1 of his 4 largest ones) weighed in at 1,411 pounds and placed 1st (out of 20 entries) at Krause Berry Farms in Langley, BC!! This is the second year in a row that Scott’s giant pumpkin placed 1st in BC!! Scott broke his own BC Giant Pumpkin record!!!

THANK YOU to all of our TOP GROWERS and SPONSORS for making this day possible! Looking forward to creating another memorable event with you next season!!

Photo of the registered Giant Pumpkin Growers on Oct 3, 2015. 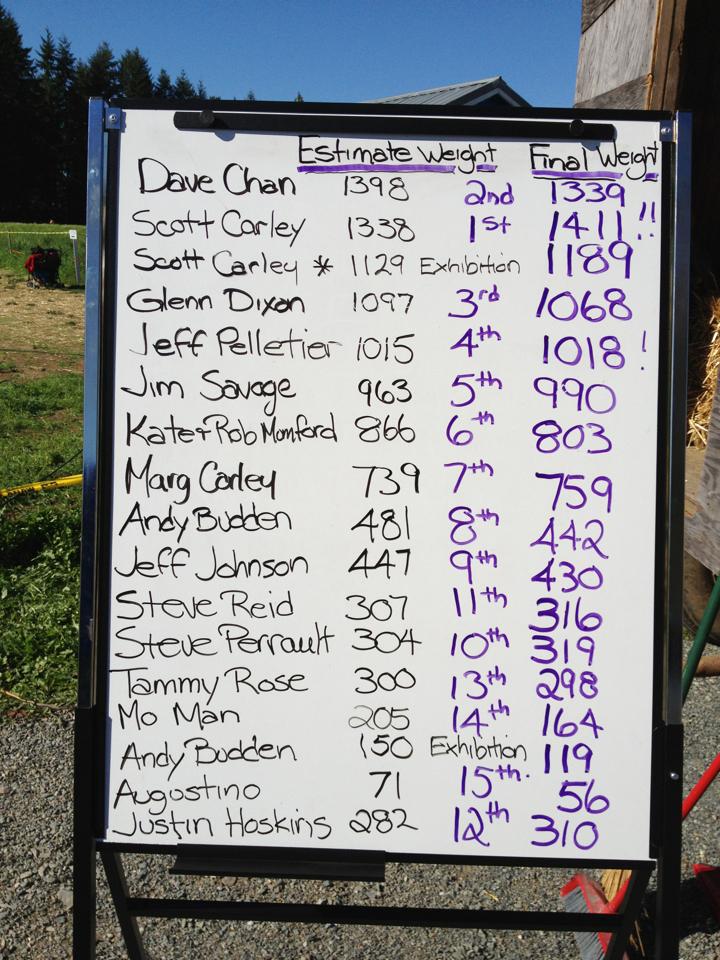 Photo of most of the Giant Pumpkin Growers. Approx. 5 are missing from the photo. 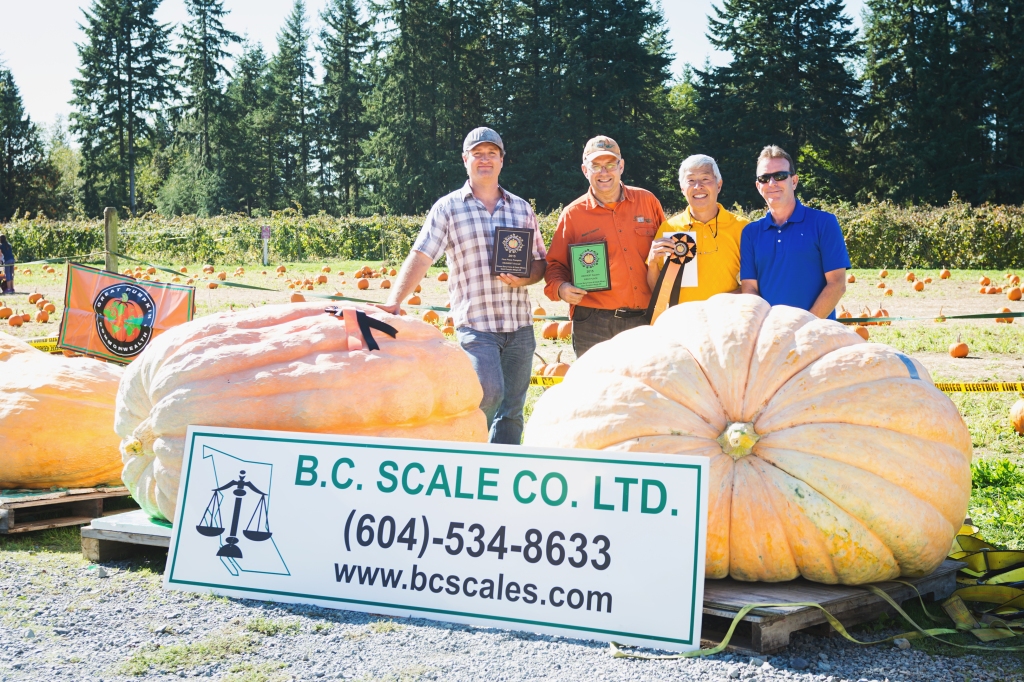 Photo of Kirstin Carley with daughter.

Global Evening News, Vancouver, BC, Video “Everything You Wanted to Know About Giant Pumpkin Growing (but were afraid to ask)” on October 3, 2015:
http://globalnews.ca/news/2257846/everything-you-wanted-to-know-about-giant-pumpkin-growing-but-were-afraid-to-ask

Big Pumpkins.com Posting of the Official Results on October 3, 2015: http://www.bigpumpkins.com/WeighoffResultsBySite.aspx?s=140&c=P&y=2015

Richmond News Article “You have to be obsessive to do well: Richmond giant pumpkin grower” on October 9, 2015:
http://www.richmond-news.com/community/you-have-to-be-obsessive-to-do-well-richmond-s-giant-pumpkin-grower-1.2082202

One of our pumpkin pals Dave Chan, retired dentist, has a great sense of humor! Here he is featured on the cover of the Richmond News posing “ON” his award winning giant pumpkin!  Based on the measurements and estimated weight, Dave’s giant pumpkin should have placed 1st this year, however it weighed lighter than the estimate and ended up placing 2nd in BC — awarding Scott’s giant pumpkin 1st place in BC again this year!!

Two of our pumpkin pals Glenn and Andrea Dixon. Here they are featured on the cover of the North Shore News with their award winning pumpkin! It placed 3rd in BC this year!! 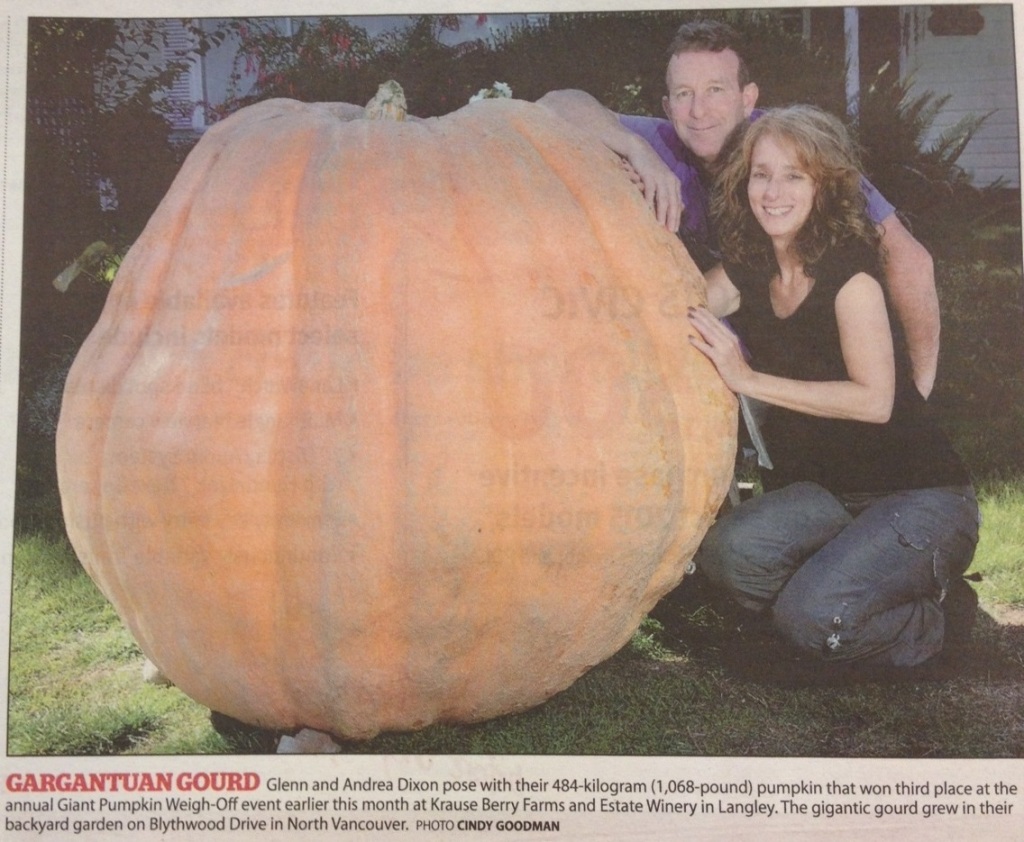 On Oct 10, 2015, Scott Carley’s giant pumpkin (1 of his 4 largest ones) weighed in at 1,305.5 pounds (lighter than the estimated weight of up to 1,600 pounds) and placed 4th (out of 25+ entries) at Central Market in Shoreline, Washington, USA!!! It qualified Scott for the 4,000 Pound Club (aggregate weight for his Top 3 Giants) and coveted Certified World Recognized Great Pumpkin Commonwealth (GPC) Jacket — Scott is the 1st grower in Western Canada to achieve this milestone — it’s kind of a BIG deal!!! And…Scott’s green monster squash weighed in at 725.5 pounds and set the new BC Squash Record!!!

Cindy’s giant pumpkin weighed in at around 1,550 pounds and placed 1st! It ended up weighing lighter than the estimate. Like all growers, Cindy hoped it would weigh-in heavy around 1,850 pounds!! It looked HEAVY!!!

Central Market in Shoreline, WA, hosted the 14th Annual Official Great Pumpkin Commonwealth (GPC) and Certified World Recognized Giant Pumpkin Weigh-Off Event. It was pouring rain, but the show went on! Central Market is HUGE and reminded us of Pike Place Market in Seattle — fresh seafood, vegetables and everything you could possibly want — delicious pumpkin brats were on the grill, caramel apples were ready to be decorated, and the apple cider was hot!

Lining up all of the Giant Pumpkins at Central Market. 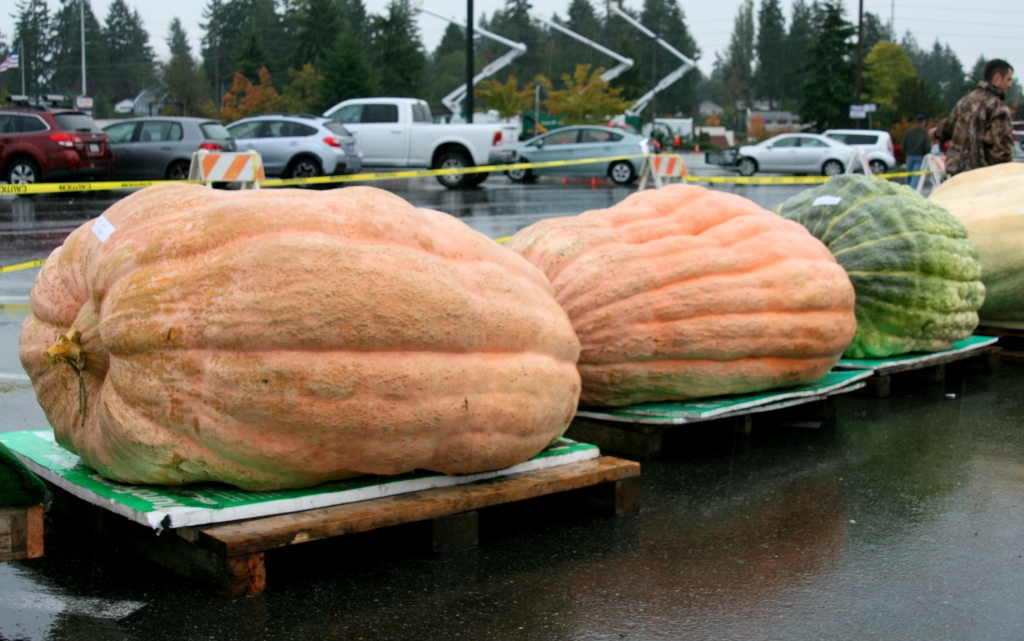 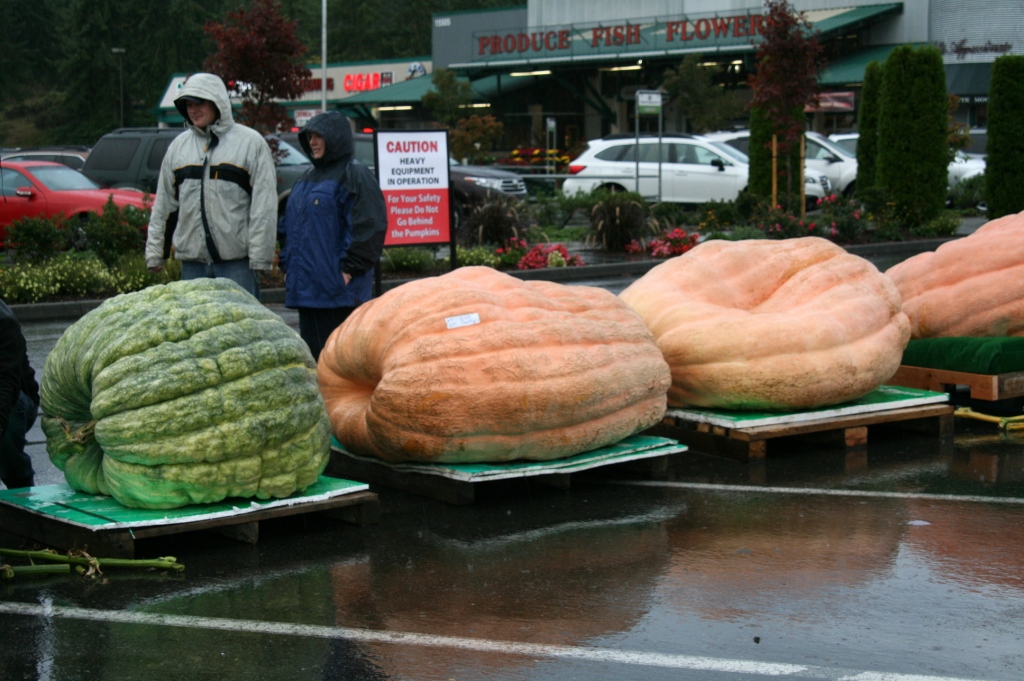 Scott and Kirstin Carley with daughter.

How many SEEDS do you think were in the 1,427 Pound Giant Pumpkin and 725.5 Pound Monster Green Squash…?? 660 pumpkin seeds and 800 squash seeds!! Visit our SEEDS page for more information!

Click 2014 and 2013 to view MEDIA (TV interviews, news articles and photos) from past events.